How Blockchain Technology Is Impacting the Mortgage Industry 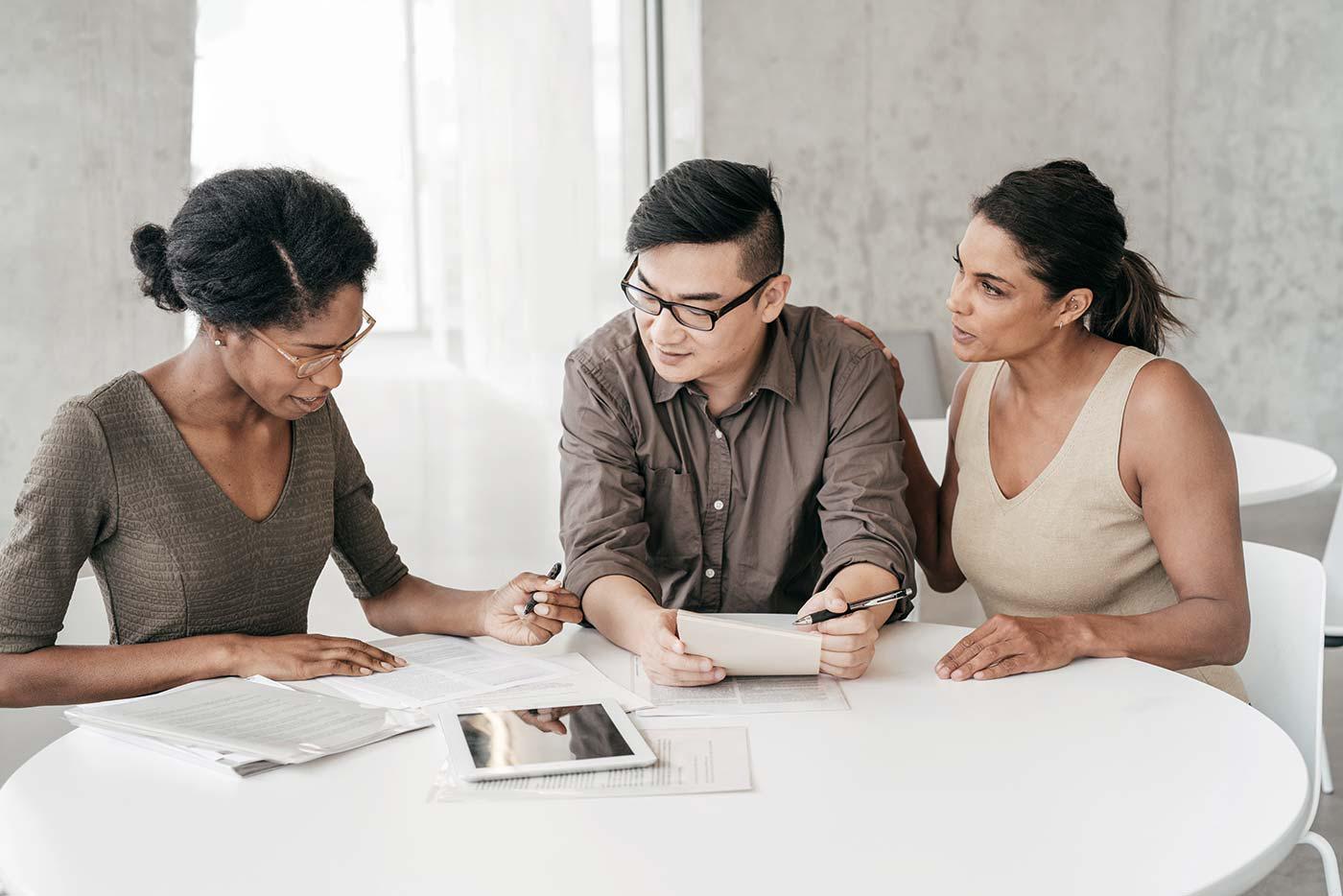 You have probably heard of Bitcoin and other cryptocurrencies. Perhaps you’ve noticed the price of Bitcoin keeps going up, and that some people are excited about its potential.

Although the average person has heard of Bitcoin, most people don’t have a good grasp of how it works. About 83% of people say they are slightly familiar with or not at all familiar with cryptocurrency. Bitcoin and other alternative currencies depend on a technology called blockchain. Although people often assume blockchain and cryptocurrency are the same, the reality is that blockchain has additional applications beyond money.

What Is Blockchain Technology?

The record can be any transaction, from someone making a purchase from someone else to someone buying a piece of property. The record contains all the details of the transaction, including the amount of the purchase, who was involved and what they bought. It also includes the digital signatures of each person involved.

Before a record can become part of the blockchain, it needs to receive verification as a legitimate transaction. Usually, nodes or a network of computers verify the transaction. Each node reviews the details of the record to confirm that things happened the way everyone claims they did.

A verified record gets stored in a block, along with numerous others. All complete blocks receive a unique code, known as a hash. The block also gets the hash of the block that comes before it in the chain. The newly completed block joins the chain, where it connects to the previous block thanks to the shared hash.

When it’s time for another block — or set of verified, completed records — to join the chain, it will get a unique hash as well as the hash of the block before it.

How Does Blockchain Work?

At this point, blockchain might sound very similar to any other form of record-keeping. When you purchase from a store, for example, the details of the transaction get verified before the sale goes through. If you pay with your credit card, for example, the card company or bank needs to confirm you have the right to use the card, and that you have enough credit to borrow the amount of the transaction before it approves it.

The key feature that sets blockchain apart from other types of ledgers or databases is decentralization. Most other databases and ledgers operate around a centralized hub, such as a bank or credit card company. The bank acts as the central node and has the responsibility of approving and verifying each record or transaction.

All the records in the blockchain are publicly available, even if the particular identities of the people involved in each transaction are not.

What Are the Benefits of Blockchain? 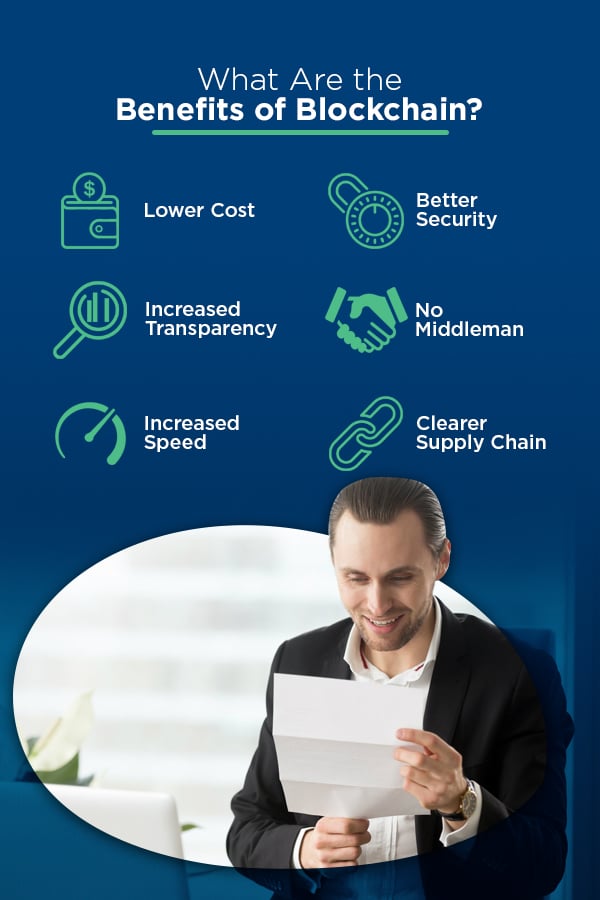 Whether for cryptocurrency or in the mortgage industry, blockchain technology has several benefits to offer. Among the most notable benefits of blockchain are as follows.

Blockchain technology often costs considerably less than more traditional methods. For example, in the case of mortgages, many parties need to become involved during the conventional process. The presence of many parties means everyone involved needs to get a cut of the mortgage or get paid in some way. Since using blockchain technology gets rid of third parties or intermediaries, it also eliminates the extra costs of using them.

Another way blockchain technology can help lower costs is by eliminating the double-spend problem. The easiest way to describe this issue is as the threat that someone will spend money twice, usually in a digital form. It takes a considerable amount of computing power to change a block in the blockchain, making it challenging for someone to try and duplicate a transaction. The elimination of the double-spend problem means there are fewer counterfeit transactions.

Finally, blockchain helps lower costs by minimizing the amount of documentation required during a transaction. Those involved in a mortgage or sale won’t have to sift through piles of paperwork, as all the required information will be in the record on the block, and everyone involved will have access to the same file.

The beauty of blockchain is that it is entirely transparent, including all transaction histories and sales records that use blockchain. Instead of each person involved in a particular transaction having a separate copy of everything that went on, they all have access to the same documentation. If someone wants to make a chance to the transaction or ledger, they need to alert everyone else connected to it, and everyone else must agree to the change.

With blockchain, a devious participant can’t alter a clause on a mortgage document and fail to tell anyone else. Pieces of information can’t go missing or get lost in the shuffle.

Although it might sound as if blockchain technology would be a slow-moving process, the opposite is true. Even though every copy of the ledger needs to change anytime there is an alteration, the process happens quickly, usually in just a few seconds.

In comparison, traditional processes that rely on a lot of hard-copy documentation and back-and-forths between different parties often take days, if not weeks. Plus, traditional methods can be error-prone. A single typo in one document or a misprint can alter the terms of a mortgage, for example, and can also delay the process of getting a loan.

Blockchain technology is more secure than other methods of keeping records and storing data. Before a record ends up in a block, all parties involved need to agree upon it. It also requires verification and approval. Once approved, the record joins the block and connects to the previous block. All records in the block get encrypted.

Although it’s not impossible for hackers or thieves to get access to information stored in a blockchain, it is considerably more challenging to do without detection.

Since blockchain technology is decentralized, there is no third party to slow down the process, or to take a cut of any proceeds. In traditional methods, it is usually the middleman who contributes to the extra cost or to delays in finalizing arrangments.

For example, if you pay someone using a check, they do not get the money from the check right away, even after depositing it into their bank account. The bank must first verify the check by confirming your account has enough money in it to draw against. The bank also needs to verify the check is legitimate, and that you wrote it and not an imposter. Usually, the bank’s role in the process adds several days to the transaction.

In contrast, if you make a payment using blockchain technology, the recipient gets it immediately. It doesn’t go through a bank for verification, nor does the bank take a portion of the transaction.

With blockchain, it is often much easier to see where things are coming from and what has happened along the way. It is much more challenging to conceal information with blockchain — except for hiding people’s identities, in the case of Bitcoin and cryptocurrency — as every piece of the transaction enters the record and gets added to the block.

Although people most commonly associate blockchain with cryptocurrencies such as Bitcoin, the technology has many potential applications beyond that. Some of the potential or current uses of blockchain technology include the following.

How Could Blockchain Mortgages Work?

Although the use of blockchain technology and blockchain accelerators aren’t yet standard in the mortgage industry, they show promise. To understand the benefits of blockchain mortgages, it helps to have a full appreciation of what takes place during the traditional mortgage process and how long the process takes overall.

What Happens During the Traditional Mortgage Process

Depending on the season and how many people are hoping to buy a home at any given time, the time it takes to receive a mortgage using the traditional method is anywhere from 30 days to about 60 days. Below are the typical steps involved in getting a mortgage.

How a Blockchain Mortgage Works

Understanding the basics of blockchain technology can help you see how it can streamline the mortgage process.

Here is an example. A home buyer is already pre-qualified for a mortgage. They’ve found a home they want to buy. They complete the mortgage application, which becomes a block. Every party that is part of the mortgage process gets access to the block, and the information in the application gets verified nearly instantly.

After approval of the loan, the buyer receives an encrypted key to sign the offer. The record of the buyer’s signature becomes a unique block that gets added to the chain. The next step is to transfer the loan funds to the buyer. The funds transfer also becomes a block in the chain, as does the transfer of the title. All told, the process of getting approved for a mortgage and settling on a loan takes just days, rather than at least a month, using blockchain technology.

The Benefits of Blockchain Mortgages

Blockchain technology can benefit everyone involved in the mortgage process. Among the potential advantages of the technology are as follows.

Are There Legal Issues Concerning Blockchain?

If blockchain is so efficient and secure, why isn’t it everywhere yet? Although there are many benefits to blockchain technology, it is still an emerging innovation, particularly in applications such as mortgage processing. That means there are still some concerns about the technology and some potential issues to be aware of.

One of the more pressing worries about blockchain is that the technology remains unregulated. There is no defined standard or method of processing mortgages using blockchain technology. For some, that might be exciting. Others might be concerned about potential issues that can come up during the process, or that the technology might not adequately address.

Although blockchain, in many ways, is more secure than older methods of sharing information, it is not impermeable. Savvy hackers can still potentially break into a system and get access to confidential information, financial records or people’s money. The size of a blockchain and the number of different parties who have access to it can make it particularly vulnerable.

Another potential legal issue with blockchain is that for it to work effectively and streamline the mortgage process, everyone involved in the process needs to be on board. A buyer and seller can’t decide to use blockchain on their own, leaving the lender out of it. The technology depends on the participation of all involved.

Ready to Buy a Home? Assurance Financial Uses Technology to Improve the Process

While blockchain might not be commonplace across the mortgage industry just yet, Assurance Financial has been using technology to help make dreams come true for years. Abby, our digital loan assistant, walks people through the mortgage application process. She’ll let you know precisely what you need to fill out your application, and she’ll let you apply from wherever you are most comfortable, whether that’s at home, in your favorite coffee shop or anywhere else with an internet connection.

Although we’ve been pioneers in the online mortgage application process, we want you to know you’re not alone when applying for a home loan. As you complete an application, a licensed loan officer will work with you and help you through the rest of the mortgage process. If you’re ready to get started and want to speak to a real human first, get in touch with one of our loan officers today.

Ready to Get Started?

Home loans is our specialty. So if you’re looking for the best home
loan experience, you’ve come to the right place.